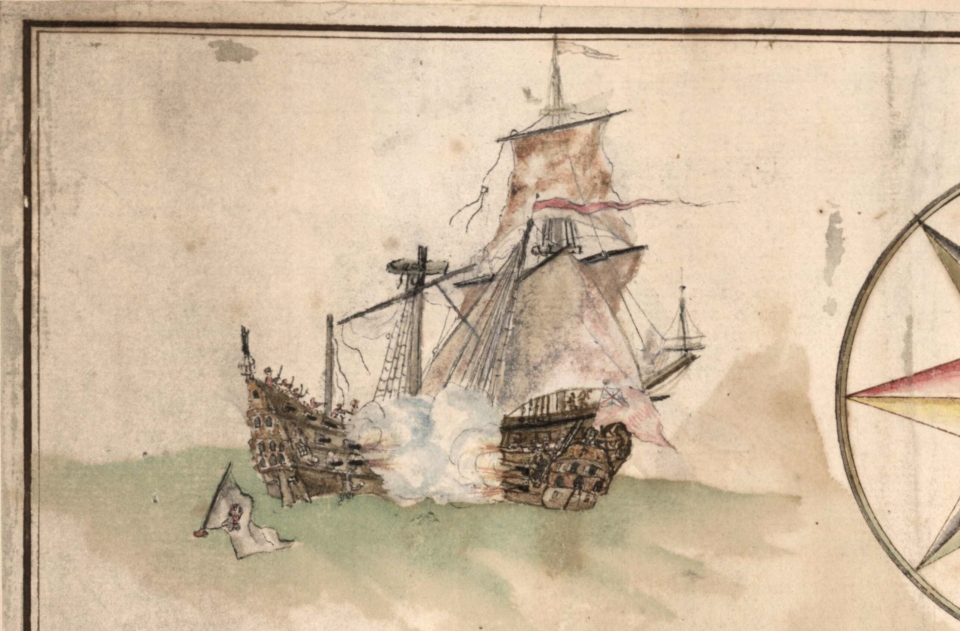 English privateer sloop engaging a Spanish merchantman during the War of Jenkins’ Ear. Detail from a chart of New Providence, 1751. Library of Congress.

A few quick notes on the use of the word pirate when the term privateer is appropriate.

It’s a minor issue, I know, this particular instance of the practice known today as “click-bait.” The practice has been around a long time, not only in political rhetoric but in marketing as well. But it has grown much worse over the past decade, and, given the state of affairs today in regard to the truth, in which outright lies often pass with too little outcry, and, almost as bad, in which mere unfounded opinion is often given equal time with solid expertise, any egregious usurpation of fact or meaning should be shunned–even in such a trivial-seeming matter of pirate versus privateer.

I am not entirely innocent of the charge myself, but in my defense it’s not been an egregious offense, and one generally committed by my publishers primarily because the word pirate is so marketable, not to mention that publishers invariably retain the right to change or even outright reject the author’s title.

For example, The Sea Rover’s Practice: Pirate Tactics and Techniques is actually about the tactics of pirates, privateers, and commerce-raiding men-of-war. But pirate is the word used in the subtitle, a decision made by my publisher. Likewise The Buccaneer’s Realm: Pirate Life on the Spanish Main 1674-1688: buccaneers were often pirates, but also often legitimate privateers as well as what might best be termed “quasi-privateers” or “quasi-pirates” operating without a legitimate commission but with a “wink and a nod” from their respective governments. Pirate Hunting: The Fight Against Pirates, Privateers, and Sea Raiders From Antiquity to the Present also discusses privateers, commerce raiders, and even early submarines. The Golden Age of Piracy is the most accurate, but, as noted already, even buccaneers were often privateers.

English privateer sloop with Spanish prize in tow during the War of Jenkins’ Ear. Detail from a chart of New Providence, 1751. Library of Congress.

Strictly speaking, piracy is armed robbery on the open seas. In the past, it was armed robbery pretty much anywhere there was ocean or land touching the ocean, at least if the thieves came by sea. Not just a crime, but a hanging crime, in other words.

Privateering, however, derives from private man-of-war, a vessel commissioned by a legitimate state to attack enemy shipping and profit from it. Lawful plundering, in other words, an entirely legal practice. A privateer might be imprisoned by the enemy if captured, but he wouldn’t be tried and hanged for piracy.

I’ve made plain in print many times that there is plenty of overlap among the various sorts of sea rover, that is, among pirates, privateers, and commerce-raiding men-of-war. That said, in most cases during the Golden Age of Piracy (circa 1655 to 1725) and afterward, the overlapping is much less common. In particular, the distinction is readily apparent everywhere except in the case of Caribbean buccaneers during the Golden Age (and strictly speaking, the only period in which true buccaneers existed).

In other words, in the majority of cases the distinction between pirate and privateer is obvious. Privateers in no ways considered themselves to be pirates, nor did anyone else except in a figurative sense by some of their their victims. Only if a privateer had overstepped his lawful authority and entered the realm of piracy might he be considered a pirate. Privateers did not claim to be pirates. Rather, they rejected the term outright. You’d get into a fight if you called a privateer a pirate, quite possibly a fatal one in the form of a duel.

Pirate and piracy have become romantic words, so it’s easy to see why they’re used whenever possible, however tenuous the connection to the subject. They’re therefore commonly used as umbrella terms for anything resembling plundering at sea, lawful or not. And they’re used in spite of the reality of piracy being anything but romantic to the usually entirely innocent victims: common seamen, coastal inhabitants, free people of color taken and sold as slaves by pirates, not to mention slaves captured by pirates and sold elsewhere, often away from their families.

In fact, it should be privateering and pirate hunting that convey the most romance, with piracy conveying revulsion, as it did in the past.

But it’s the caricature that matters: the word pirate conveys the image that draws the eye, and the description the ear.

“An English Ship in Action with Barbary Vessels” by Willem van de Velde, 1678. National Maritime Museum. The Barbary vessels were privateers, commonly known as Barbary corsairs. They were not pirates, notwithstanding that the term was sometimes, and often still is, applied. They were actually legitimately commissioned privateers. The reason they are often referred to as pirates is because (1) they were not Christians, and (2) they captured and enslaved white Europeans. The irony that white Europeans enslaved black Africans (and other people of color as well) seems to have been lost. (Note: This painting was used for the Pirate Hunting dust jacket.)

Part of the problem with the lure of the word is that piracy has been re-interpreted as a form of rebellion against injustice. Pirates, we are told by too many scholars both amateur and professional, were rebels against empire, against unfair corporate practices, even–falsely–rebels against slavery. They are mostly the “good guys.” We are told that they may even have helped inspire the American Revolution and that they even threatened the existence of the English and other empires. Although there are occasional fragments of related truth in these claims, none of them are profoundly true or even slightly more than less true. They are not even as true as the suggestion that privateers were a form of pirates.

But to reemphasize, pirates were sea criminals, and in no way did their victims view them as heroes. Simply reading through a list of pirate cruelties and other depredations should be enough to correct the false image–but seldom does it. Privateers, although some did break the law at times, were by comparison Boy Scouts.

There are periods in history in which some groups of commissioned privateers behaved piratically: Spanish Caribbean privateers in the Golden Age, French and English buccaneers in the Golden Age, Colombian privateers during the South American wars of revolution (and likewise Spanish men-of-war fighting Colombian privateers), for example. But they are in the minority as compared to the enormous number of commissioned privateers, and when privateers did commit piratical acts, they were considered to be pirates. However, the majority of privateers behaved lawfully or largely lawfully, restricting their attacks to enemy shipping as permitted by law. The majority of privateers should never be referred to as pirates, nor should the term pirate be a catch-all for any sea rover, legitimate or other. 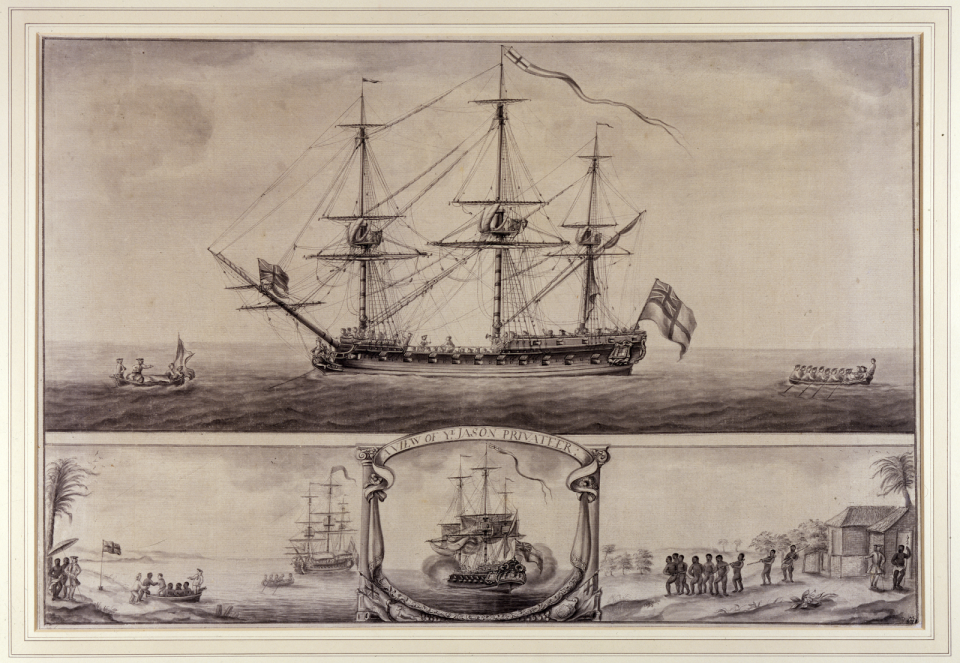 The inspiration for this post–not that it hasn’t always been on my mind in a small, usually resigned, way–was a recent NPR “All Things Considered” segment: How Pirates Of The Caribbean Hijacked America’s Metric System. The segment does note that:

“And you know who was lurking in Caribbean waters in the late 1700s? Pirates. ‘These pirates were British privateers, to be exact,’ says Martin. ‘They were basically water-borne criminals tacitly supported by the British government, and they were tasked with harassing enemy shipping.'”

But the privateers were not tacitly supported by the British government, that is, with implied consent. Rather, they were officially supported, they had explicit consent. They were not pirates, notwithstanding some critics who considered that privateering was in some ways piracy legitimized.

Bad history and click-bait are a common combination these days, although the example above is not by far one of the many egregious examples. Still, it is hard to imagine that the word pirate was used for any reason other than to draw the reader or listener in. Worse, the phrase used in the title is “Pirates of the Caribbean,” conjuring up images of romantic buccaneers, not to mention fantasy pirates like Jack Sparrow.

The correct title of the NPR segment should have been “How Privateers Hijacked America’s Metric System.” But this has much less cachet, and is far less likely to get someone to click on the published article and read it, or tune in later to listen. The title is actually a bit doubly misleading: did the capture of a metric weight really keep the new US from considering the metric system? Or was it, as the segment does note it might have been, just a missed opportunity?

I emailed All Things Considered on this minor matter several days ago. I haven’t heard back, even though I noted my several works on the subject of piracy and privateering. Perhaps the editors found the word click-bait offensive, or the fact that I pointed out that pretty much the same article ran in The Washington Post this past September on Talk Like a Pirate Day.

I’m not singling out NPR, this is just the most recent example I have at hand. I like NPR and have been a listener off and on for decades (mostly depending on how often I’m in my Jeep). But facts are facts, and when they’re imposters it doesn’t matter who the offender is–the offense needs to be pointed out.

The difference might be a non-issue with an educated audience, one that understands the difference between pirate and privateer. But today too many people are getting their education, such as it is, from click-bait articles on social media–articles that are ultimately misleading.

While this may seem to be nothing more than quibbling, it remains vital for the sake of truth to get facts straight. And this includes word definitions because they’re the primary means of conveying factual meaning, aka facts. We’re overwhelmed today not only with obvious liars and subtle liars, but with a large segment of society who excuse loose meaning and interpretation as a means of getting attention. It’s not only ideologues and Mammon’s imps who play fast and loose with the truth anymore, but every know-nothing and know-a-little know-it-all considers his or her wrong-headed opinion to be equal to that of the knowledgeable, facts be damned. And the disease is spreading to mainstream educated society: the Internet is making everyone lazy. How to stop this? By using facts to point out errors, misconceptions, and outright falsehoods.

For the privateer, definitions and facts made all the difference: it’s what kept him from being hanged as a pirate.