A brief place-holder blog post (and at the bottom a not quite shameless plug for Blood & Plunder by Firelock Games) while I finish several more challenging posts in the queue.

Before the advent of CGI, many swashbuckler films used models of ship and shore, along with full-size ships built on sound stages, to both recreate environments no longer available and also to save money. To some degree the early miniatures may seem quaint today, as compared to CGI, although in my opinion bad CGI is worse–more jarring to the eye–by far than an obvious model.

These old sets and scenes evoke nostalgia for the entire spectacle of old Hollywood swashbucklers: the cinemas with their great screens and clicking film projectors, the lasting impressions left by thundering broadsides and clashing swords, and above all the image of pirate ships in tropical waters.

For fun, here are a few. 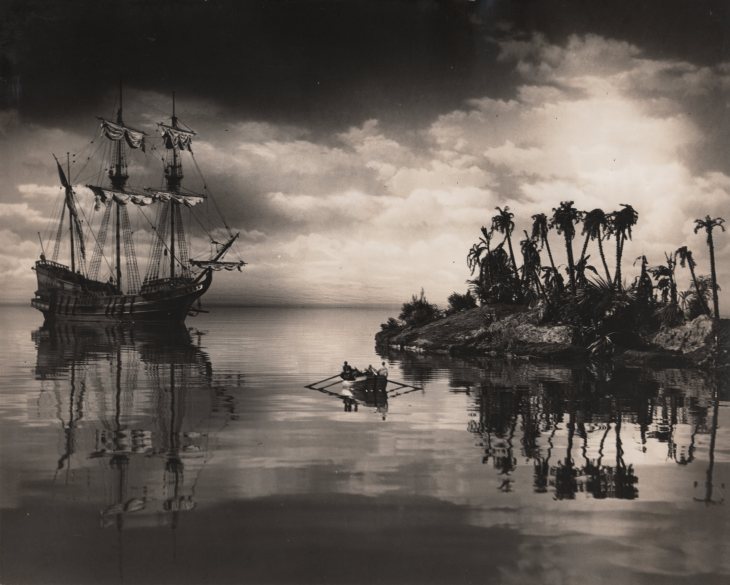 Above, the Albatross, commanded by Capt. Geoffrey Thorpe (Errol Flynn) arrives in a secluded cove on the Isthmus of Panama in order to raid the silver trains. The film scenes set in the Old World are in black and white, while those in the Americas are in sepia.

Only the film title is actually based on the novel by Rafael Sabatini, which tells the story of an English gentleman who turns Barbary corsair in an act of revenge. The 1940 film is a not even thinly-veiled wartime propaganda piece, albeit an enjoyable one. English sea dogs are renamed in the scrip as patriotic sea hawks suppressed by treasonous machinations until the doughty hero (Errol Flynn) reveals the treachery and England arms the sea hawks against Imperial Spain. For more information try  The Sea Hawk, edited by Rudy Behlmer. It’s a fun read for anyone interested in the script and the film’s history.

Next, we have the models of Port Royal and the French flagship used in the finale. This image is not of an actual scene from the 1935 Captain Blood starring Errol Flynn, Olivia de Havilland, and Basil Rathbone, but of the set prior to shooting. 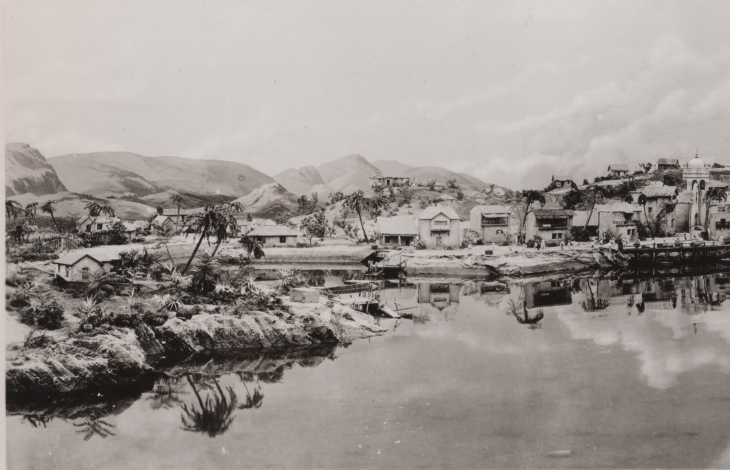 Detail from the photograph above.

Of course, the real Port Royal looked nothing like this. It was actually crammed with English-style brick buildings of two and even three floors, unlike this Southern California Spanish colonial revival-influenced town. But it’s sets like these in Hollywood swashbucklers that have influenced our notions of what the seventeenth century Caribbean looked like. In fact, the region at the time had a wide variety or environments and architectures. 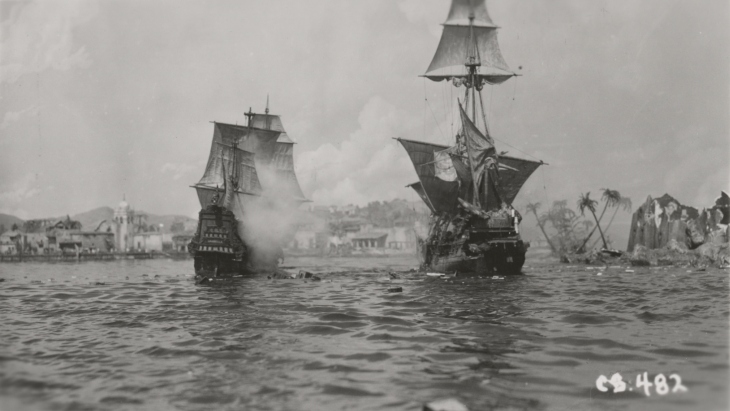 Above we have the battle in Port Royal harbor during the finale of Captain Blood: the Arabella on the left versus the French flagship on the right. N. B. Royal sails (the smallest on the ship on the right, the fourth sail from the bottom) were not used in this era. Their use here is an anachronism. In fact, only exceedingly rarely was the topgallant sail (the third sail from the bottom, used on “tall ships” on the fore and main masts) seen on the mizzenmast or sprit-mast on the bowsprit. I know of only two seventeenth century instances, each noted as being highly unusual. One was Kidd’s Adventure Galley in the very late seventeenth century, the other was a Spanish ship in 1673. 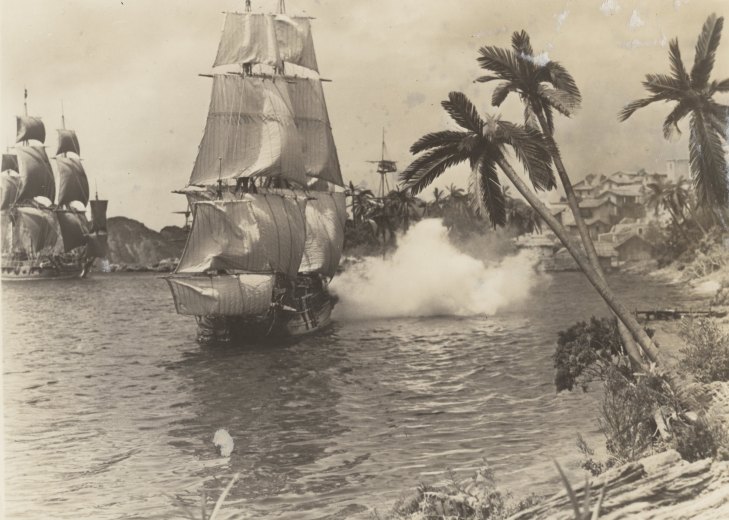 A pirate ship under full sail in action against ships at anchor and shore targets during the finale of The Black Swan starring Tyrone Power and Maureen O’Hara. The film is based on the somewhat similar novel by Rafael Sabatini. 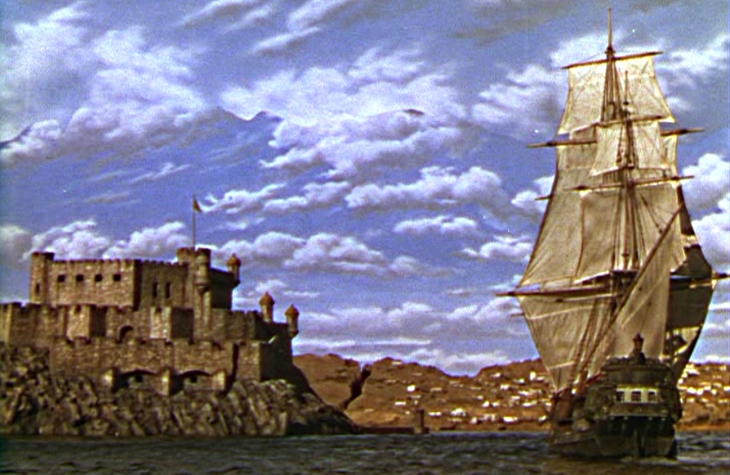 A pirate ship sailing into Cartagena de Indias under the guns of a castle in The Spanish Main starring Maureen O’Hara and Paul Henreid. 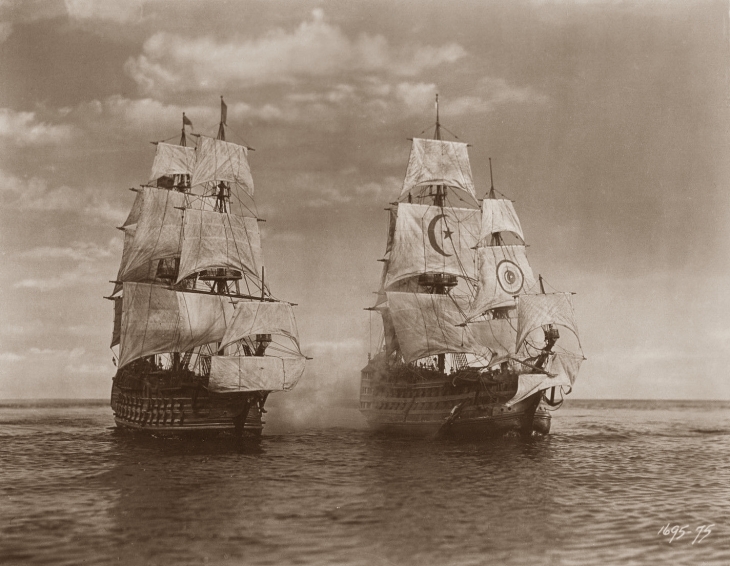 Over-large pirate ship and treasure ship of the “Great Mogul” in Against All Flags. The ships are engaged under full sail, a practice generally not seen in reality except in the case of a running fight, but quite common in Hollywood because it looks good. Here, both ships would have stripped to “fighting sail” for a variety of reasons, including simplified ship-handling in action. The film stars Errol Flynn, as Brian Hawke, in one of his last swashbucklers (followed finally by The Master of Ballantrae in 1953 and Crossed Swords in 1954). It also stars Maureen O’Hara wielding a sword as Prudence ‘Spitfire’ Stevens, something I always enjoy. 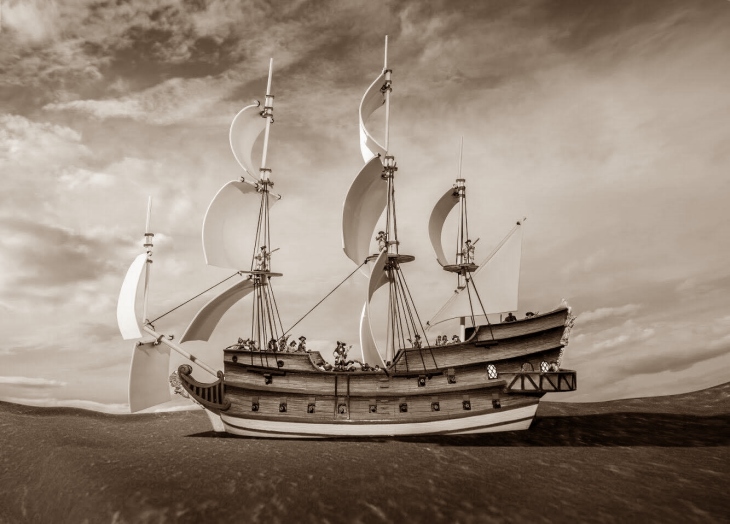 And now, a not quite shameless plug for Firelock Games’s Blood & Plunder tabletop war game of piracy and much, much more–one need not take the side of pirates to play. A full spectrum of peoples and forces are available.

Full disclosure: I’m the game’s historical consultant, and I thought it would be fun to compare the Blood & Plunder models to the film models above.

So, above and coming soon: a small Spanish galleon. Historically accurate, the model also evokes the best of old Hollywood swashbucklers. 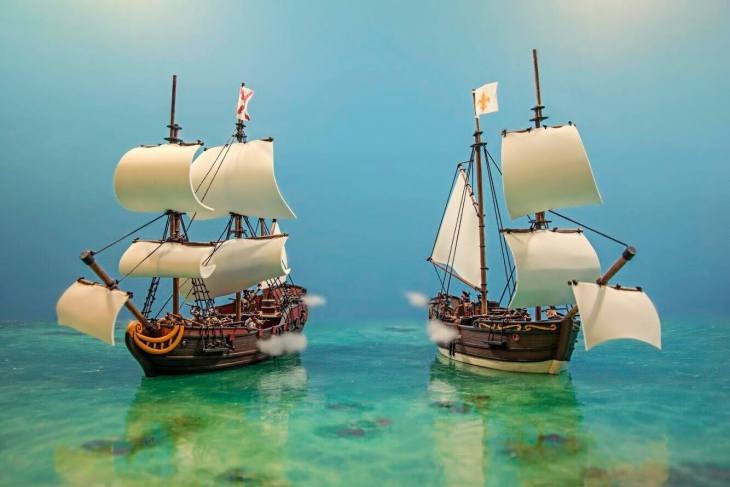 A small Spanish frigate engaged with a French brigantine. 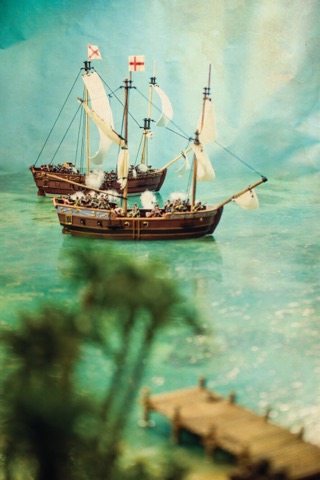 Spanish and French brigantines engaged near shore. Which is the pirate? (Answer: either could be!) 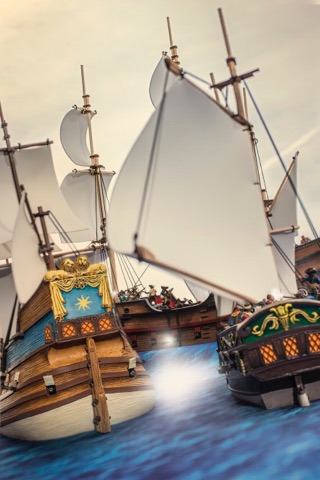 A small fluyt (in English a pink, in French a flibot, in Spanish an urqueta, on the left; a galleon at center; a brigantine on the right. 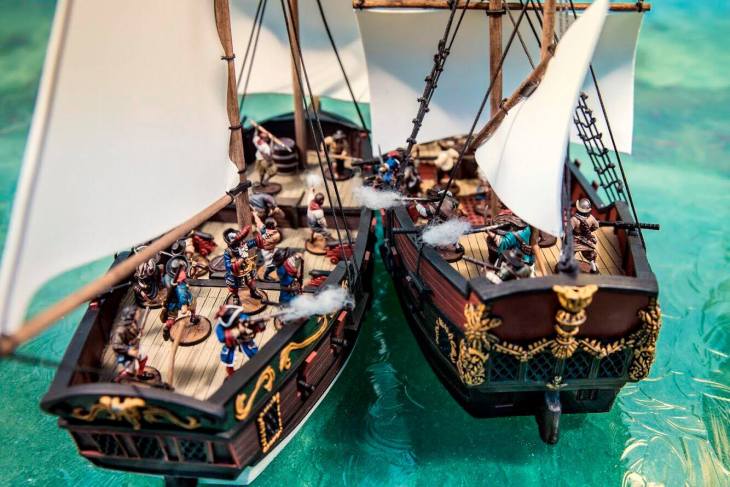 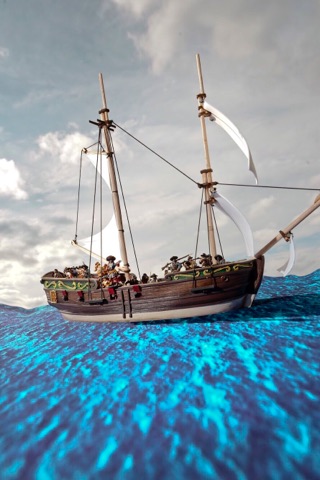 By Benerson Little in Maritime, Pirate Myths, The History of Piracy, Uncategorized on April 16, 2018.
← In Honor of My Fencing Masters: Hussar Swordplay on Horseback! Fencing Salles & Fencing Commandments →

This site uses Akismet to reduce spam. Learn how your comment data is processed.